I have a confession. I thought Father’s Day was June 14.

All last week, I panicked getting gifts and a handmade card mailed to my dad, thinking it would never get there in time.

I also thought I wouldn’t have time to share my super cute, super easy card idea.

But ha, my mistake actually made me ready early, which never happens. So now, hopefully, I can just kick back and relax Sunday.

Thank you universe. I’m quite enjoying this whole be ready early phenomenon. Honestly, I’m a little smug about it. Maybe this could be a thing…

I know you’ve been patiently reading, waiting for me to get to the “meat” of the post. So here it is…

If you want to make a cute and easy card just brush some watercolor on your kid’s hand, and slap it down on some reasonably thick paper.

Really not a lot to it. 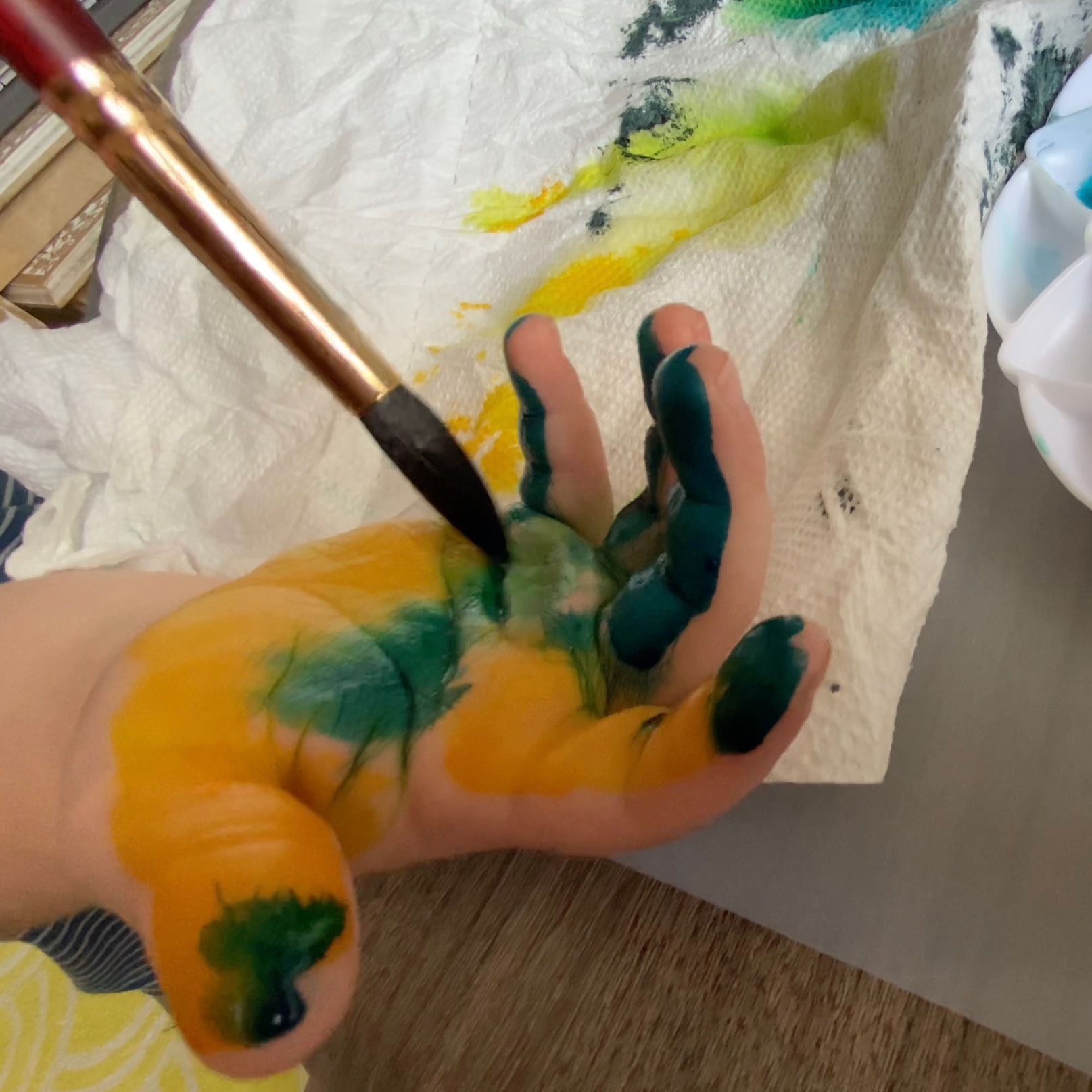 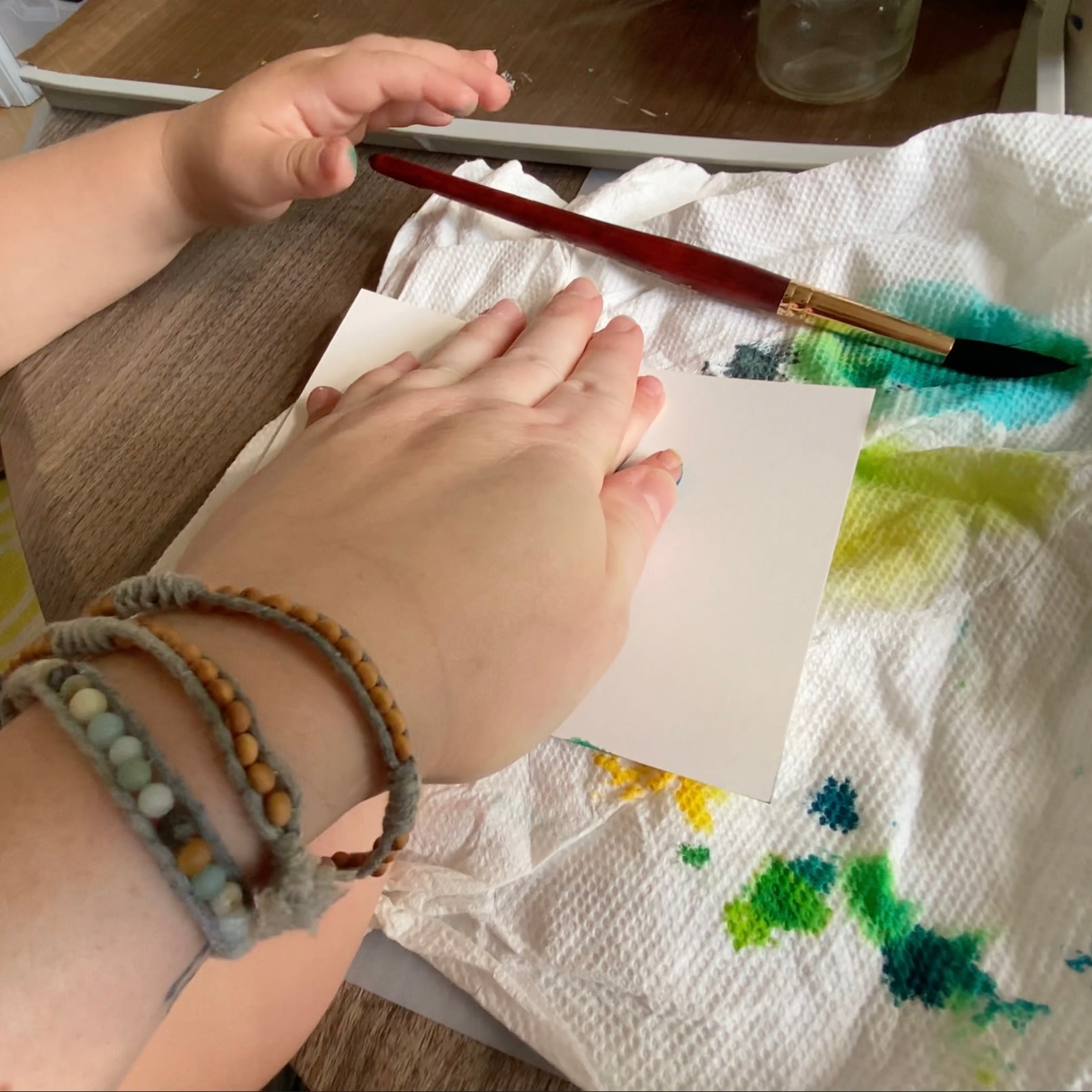 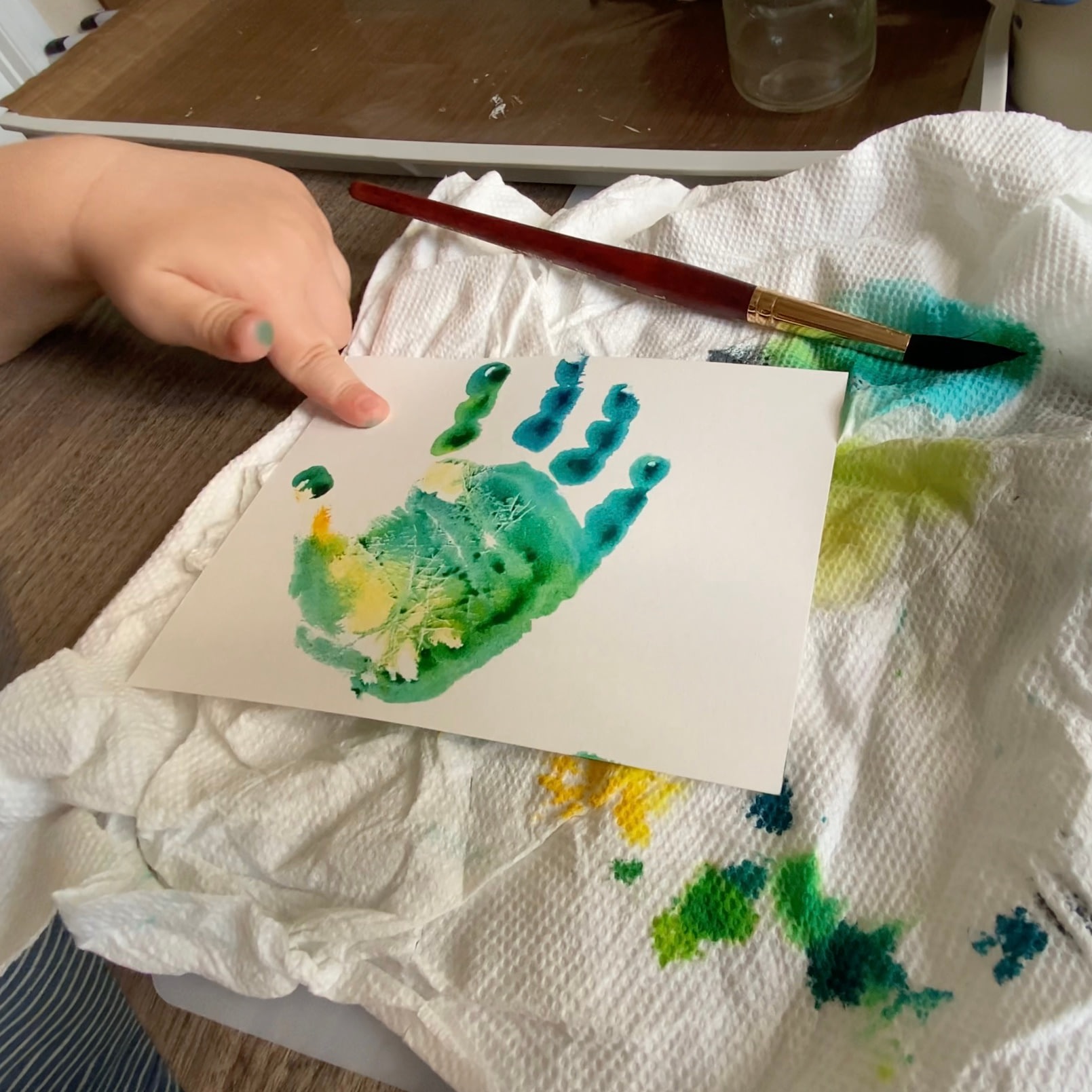 There’s a few tips and tricks, but really it’s hard to mess up.

Tip 1: Well more of a statement than a tip… but I like using watercolor better than acrylic paint. I love the way it soaks and spreads down into the paper.

It’s also easier to clean up, in my opinion. 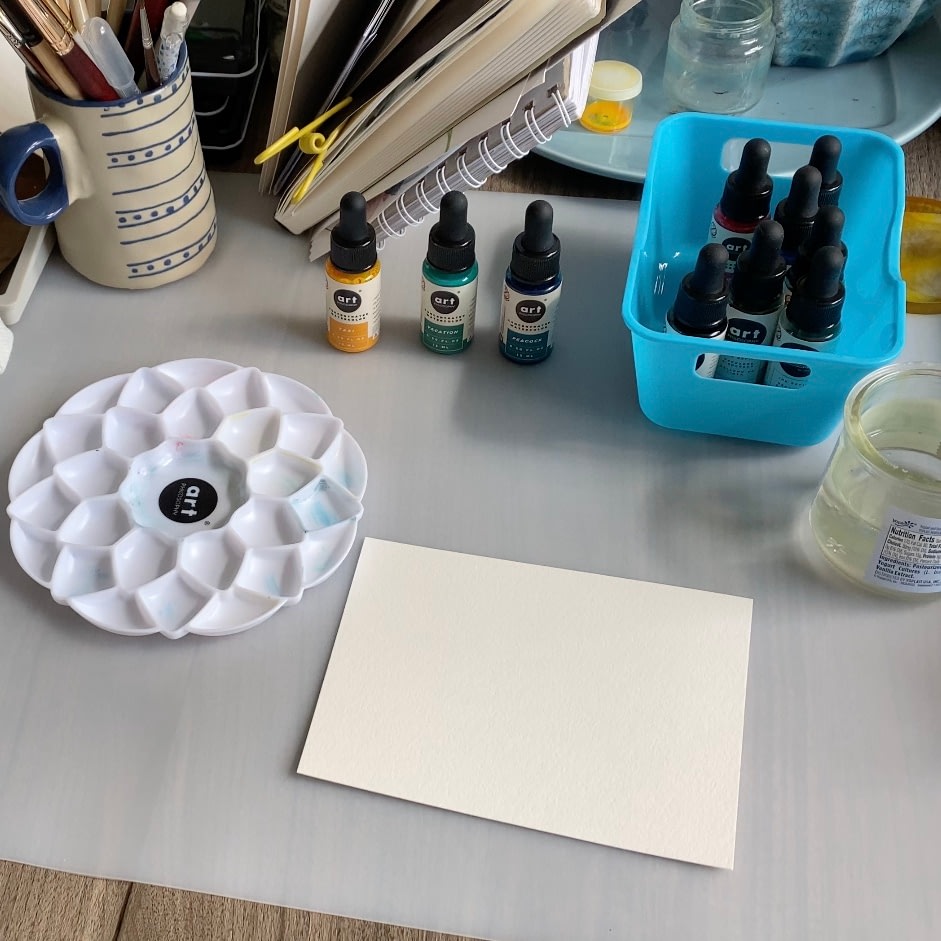 Tip 2: You want really concentrated colors. I used liquid watercolors. I added a few drops to a palette and painted it on as thick as I could. Brush some water on their hand first so the paint is a little wetter. You could also use any other watercolor, just make sure you get as much paint on the brush as you can. Don’t try and layer thin washes on their hand. They will probably not sit still for that.

Which leads me to…

Tip 3: Put some paper towels under their hands. Many paper towels, or just regular towels, but something to keep it off your floor.

Tip 4: As soon as they have plopped their hand on the paper, lift it straight up and wipe it with the towel. Then go wash it off.

Tip 5: Try multiple colors. They will mix, so pick colors that blend well.

Last Tip: Sprinkle some salt over the paper after stamping their hand for a cool effect.

I’m sure this has been done before by many parents, and I’m definitely not the first person to come up with it, but personally, I think it’s a completely underutilized medium when it comes to stamping your child’s hands.

I remember when my toddler was brand new and I wanted to capture those tiny little hands and feet.

I spent like 4 hours reading blogs and forums on the dangers of putting acrylic paint on infant’s skin.

I eventually did it anyway, but then I was stressed about it for a couple of days. I kept acting like I had put plutonium on his delicate skin…and had a nice case of mom guilt for a while. However, he was fine, of course he was fine.

But if I had thought about watercolors, especially non-toxic watercolors, I would have felt so much better about it.

Really, making some all natural watercolors (which there are a gazillion recipes online of how to do it) would be a great idea for those little ones that you just aren’t ready to smear with chemicals yet.

I bet you could even get a paw print.

Try it and let me know what you think! 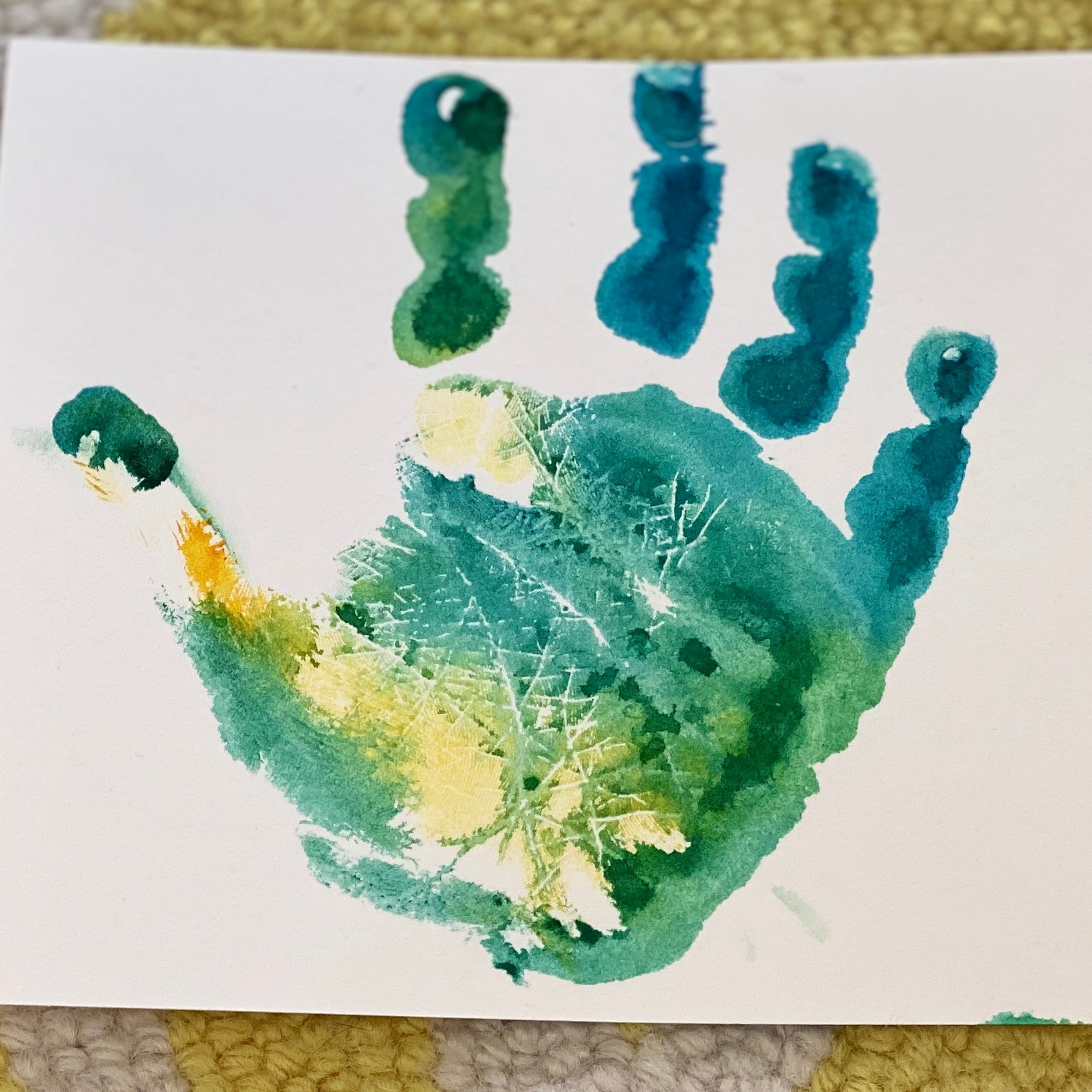 Update, November, 2020: This particular post keeps glitching out on me. However, I am determined to keep it posted in its original form. My father suddenly passed away a few days after Father’s Day and I cannot bring myself to take this post down or change it. Funny enough, this post has been such a defining moment in my life. When I wrote it, I felt like everything was okay in my life, it wasn’t really, but I had a lot of hope. When my dad died, a tsunami of horrible events followed, and the lives of my children and I have been forever changed. It has become kind of a marker of where I was, versus where I want to be.  I’m sorry if the post has some formatting issues. My block editor doesn’t always cooperate with me. But I really appreciate you sticking it out to the end and hope you found the content useful.

Back to Blog
Support Our Small Business

How to easily create a cute cactus drawing using markers...

A discussion about what art is and what makes someone...

A quick and easy way to stamp your child's hand.

A fun way to update your children's furniture.

Hi! I’m Gigi. I am a mother, writer, and artist. Artgamy is the place where I come to show the world my creations. My motto is, “Create your life, and let your life inspire your greatest creations.” I believe that there is beauty in everything. Anything can be art, and you don’t have to be a master to make it. Nature is my favorite muse and medium…but I’ll slap some paint on just about anything.